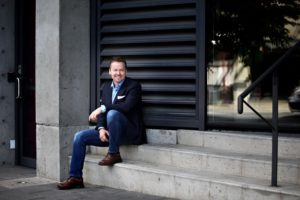 Paul has lived in Victoria since 1986 when he was posted to Victoria with the Canadian Navy. Paul served for 8.5 years as a Marine Engineer and holds a diploma as a Marine Engineer Technician. In 1995, Paul retired from the Canadian Navy and joined the Saanich Police Department where he served for the past 21 years. Paul was a Detective, a sniper on the Emergency Response Team, a Firearms Instructor, and a member of the Saanich Police Dive Unit. In 2012, Paul graduated from Royal Roads University with his Master of Arts in Leadership (MA).

In 2006, Paul purchased the Serious Coffee franchise at Millstream Village Mall and has been immersed in every aspect of entrepreneurship since opening day. Paul took a Leave of Absence from the Saanich Police Department in 2007 and immersed himself in the day to day operation of the cafe and was Runner Up as ‘Entrepreneur of the Year’ in 2007. Today, Serious Coffee Millstream Village continues to operate as the central meeting spot in the West Shore.

In 2017, Paul took early retirement from the Saanich Police Department to pursue his career in coaching and graduated from Royal Roads University with a Graduate Certificate in Executive Coaching (CEC).